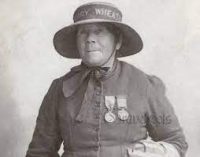 Mary Wheatland was born in 1835 in nearby Aldingbourne. When she moved to Bognor with her husband George, she taught herself to swim, and then began to teach others, both locals and visitors to the area. Mary soon began operating the bathing machines along the seafront. You could hire a swimming costume and towel from Mary before entering the bathing machine to get changed. Once you had finished, you would return your things to Mary and she would wash them and lay them out ready for the next swimmer!

Mary became quite famous for amongst beach goers and even ended up being pictured on many postcards from the time. Mary eventually retired in 1909 at the age of 74. During her time working at the bathing machines, Mary was attributed to having saved over 30 lives and even boasted that she ‘never lost a life’.

She was still a popular face on the beach even after her retirement, until her death at the age of 89 in 1924. Mary was laid to rest in South Bersted Churchyard and was honoured with a very impressive funeral ceremony from her home to the church.

This year, to celebrate Mary, a blue plaque will be placed on the side of Bognor Regis Pier, overlooking her site on the beach at the end of waterloo square.

Date: 27th May 2022
We use cookies on our website to give you the most relevant experience by remembering your preferences and repeat visits. By clicking “Accept All”, you consent to the use of ALL the cookies. However, you may visit "Cookie Settings" to provide a controlled consent.
Cookie SettingsAccept All
Manage consent

This website uses cookies to improve your experience while you navigate through the website. Out of these, the cookies that are categorized as necessary are stored on your browser as they are essential for the working of basic functionalities of the website. We also use third-party cookies that help us analyze and understand how you use this website. These cookies will be stored in your browser only with your consent. You also have the option to opt-out of these cookies. But opting out of some of these cookies may affect your browsing experience.
Necessary Always Enabled
Necessary cookies are absolutely essential for the website to function properly. These cookies ensure basic functionalities and security features of the website, anonymously.
Functional
Functional cookies help to perform certain functionalities like sharing the content of the website on social media platforms, collect feedbacks, and other third-party features.
Performance
Performance cookies are used to understand and analyze the key performance indexes of the website which helps in delivering a better user experience for the visitors.
Analytics
Analytical cookies are used to understand how visitors interact with the website. These cookies help provide information on metrics the number of visitors, bounce rate, traffic source, etc.
Advertisement
Advertisement cookies are used to provide visitors with relevant ads and marketing campaigns. These cookies track visitors across websites and collect information to provide customized ads.
Others
Other uncategorized cookies are those that are being analyzed and have not been classified into a category as yet.
SAVE & ACCEPT
Powered by